The RMS Annual General Meetings (AGMs) are set to take place on 29 September 2022. Places to attend in-person will be limited, however, the AGM's and short talks will also be streamed on Zoom and it will be possible to attend virtually.

The AGM's will be taking place at the following times:

We invite all our members to join us to reflect on the year and plan for the future.

The Society’s AGMs are free to attend for both members and non-members.

A number of scientific talks will be given in the afternoon and this will be followed by a drinks reception. 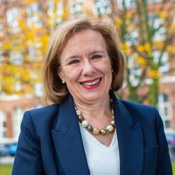 Grace joined the University of Manchester as Director of the interdisciplinary Materials Research Centre and Professor of Materials Performance in the School of Materials in September, 2011.  She was also Director of the Electron Microscopy Centre from 2012 through 2016. Grace is a physical metallurgist for whom microstructural characterisation has always represented an integral and fundamental component of research into materials performance.  She obtained her BS in Metallurgical Engineering from the University of Pittsburgh, and her PhD in Metallurgy from Imperial College of Science and Technology where her SCC research work included analytical, high voltage and in situ electron microscopy.  Grace then joined the US Steel Research Laboratory where she conducted research on ferrous alloys including the use of atom probe field-ion microscopy as a complementary technique to AEM in the investigation of commercially important materials.

Subsequently, Grace joined the Westinghouse Science & Technology Centre where she applied of combinations of AEM and APFIM techniques to a broader range of nuclear and power generation materials.  In 1994 she joined the Bettis Atomic Power Laboratory in order to focus her research on the environment-sensitive behaviour of engineering alloys in nuclear reactors, and, in 2009, was the first woman to be promoted to the highest scientific position, Consultant.

Since joining Manchester, Grace has continued her to employ her established portfolio of advanced techniques to address a range of materials issues, returning to utilize in situ TEM  to now investigate precursor reactions of material degradation liquids and gases.  Grace was the 2005 President of the Microscopy Society of America and has been a Fellow of RMS since 1988. She is also a Fellow of ASM International, the Microscopy Society of America, the Microanalysis Society, IOM3 (UK), and TMS (USA).